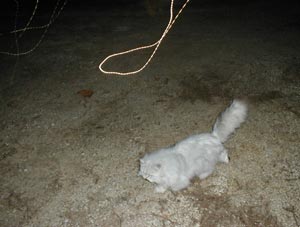 Are weird things being visited upon my cat? I was taking the new digital camera for a spin outside just now, testing the flash and such, when I discovered that something strange found Avatar the cat rather interesting. Now, he did a lot of catnip today ( can't you tell? ) and so might be projecting trippy thoughtforms and such, but whatever it is there was nothing I could see in the area out back where I took the pic that could do that. What we have here is a very low-res image... the original is over a meg and the beads of light are in very rich detail... especially the fainter ones to the left of the loop.

I took this shot in a genuinely spooky, spectral house in Delaware over the Yuletide hooplahdays. A friend I'm doing a wedding for asked me to check out this house of another friend, saying that it was haunted as all get out. Going up to the door of the place gave me the heebie jeebies. As we went through the upper floors, I got a definate sense of a female around us, maybe a very young girl.... if not a personality but an impression, a residual memory. I took this shot right as Amber was reporting that strange things were happening to the flame of the lighter. Looking at the "face" in photoshop, it overlaps both the white and dark areas of the shades, ruling out a simple reflection.

Who knows what these things are and what they mean. I'm a "sceptical believer." I want to say yes to any phenomena, but it's helpful to use the scientific process to weed out false singals and misleading data. There's so much that eclipses rationality in our shared reality. Once these things are observed ( since likely they're happening all the time ) and put through a process of rigorus examination using known and verifyable variables, some unknowns will escape the sifting and will be swinging in the netherworld of grey areas. Maybe someday down the road there'll be some logical, rational explanations that resolve ghosts, UFOs, deja vu and ESP.

But if those are ever reduced to equations and reason, I'd expect that God and the meaning of life will be next in line. Right now that line is eternally long and the mystery too grand, that I hope that the someday never happens and we'll always have a reason to shrug our shoulders, guess, and look up to the stars in wonder and awe. Avatar isn't worried. He's back to the catnip.

For more anomalous images, check this out. Here's ghost photography specifically. Also phenomenology as a science and things Fortean.

Semi-relative comment: My cat looks identical to yours, however, we call him Jake.

The Truth About Cats and Orbs