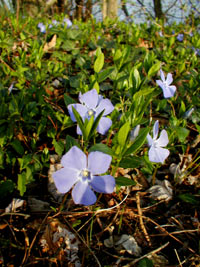 I suppose, that inspite of the madness and whirlwinds of war and anxiety that attempt to deface the charms of the day, one can still have a mystical experience with a periwinke. Which just happened, relatively speaking. The lake begged me to walk it's shores, and after about 5 laps, I sat down to rest and whittle away a few minutes before coming here, the refuge of the hitchhikers on the information superhighway, the cyber cafe ( which takes on a different meaning altogether if you consider the Greek root of 'cyber,' which means helmsman or pilot ). There was a quiet spot away from the fellow joggers, dogwalkers, and wayfarers where the lake kissed the banks in tiny waves.

Poking out in a daring gesture of nature's verve was a little periwinkle, the color of dawn's first winking, facing the east and twittering in the breeze. So simple this little thing, so beautiful. It fulfills it's role without anxiety, without time ( other than the swaying of the season encoded in it's genetic sing-song ) without worry that it's root's grasp on the soil, only just surrendered by winter, is tenuous and fragile. We humans are much the same... we skim from minute to minute hanging by a thread, our place in the world unknown beyond conjecture, and call this delicate, complex arrangement an average day. The cellular structure of humans and periwinkles are both organized but complicated, designed to make sense but only in an evolutionarily roundabout way. The roots look much like neurons, a tangle of communication in a peculiar medium that supports life and creation. We are both based structurally of the golden mean, and are made up of spiraling matter. So many similarities, and of course vast differences. Yet which is more obvious, really?

Remember the bit about lillies of the valley, not toiling and all worked up like their bipedal observers? Could it be that we could emulate, resonate and create that kind of state amidst what we've chosen to make out of this world? Could we stop thinking for just a sec and twitter with the breeze, absorb the sunlight, draw up sustainance from our roots and just be. It's vulnerable! I could pull up that periwinkle in the blink of a hummingbird's eye and go down the road without a care. If it were sentient and mobile, it would avoid my advance, and a game would be on, though the odds are predictable.

But life is a risky proposition. To be here means at some point we won't, the breath of life is also a covenant with the stillness of death. Too many times in my life I've missed the totality of a beautiful moment by looking for my camera, being distracted by where I'm supposed to be next, and the tumble of routine and expectation. What does the periwinke expect? Nothing. What does it need to do? Grow. Is that a guaranteed outcome? Nope. But it still keeps going, according to it's purpose, no matter the proximity of my stumbling feet, dimwittingly crashing through paradise to get to the next appointment with expectation.

I learned a lot from that little life form today. I felt grateful to share the ground with such a wise creature. I don't know how well I can be a periwinkle, or a bluebird, or even a human trying to walk in balance and beauty, but it's worth a try. I know there's danger all around, but the sun is out, my love is strong, and the way the lake mists at night is better than worrying, expecting, and banking on the future.

In less stunning news, the epic saga of the computer continues. Tonight it's at the home of someone who's competant, capable, and who knows what they're doing. I'm taking all this in stride, I really am, but I'm ready for this to be a non-issue.

What would a periwinke do?