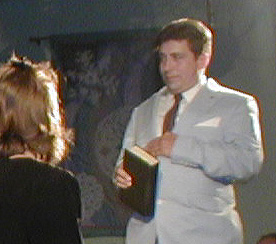 The play debuted last night to a packed house, and we were blessed with a standing ovie. I, on the other hand, dealt with a throat cluttered with obstructing yuckies and my voice bailed a few times on stage. I was a bit wobbly. The toupee painfully fixed on my perfectly hirsute head may have thrown off my balance, or it could have been the pillows strapped to my posterior and stuffed down my shirt. Reverend Hooker is a very robust character, to say the least. The post-applausal festivities dragged long into the night with a motley assortment of beloveds and my new pal Gustav, recent immigre from distant California.

At work today several folks said I had a glow about me ( residual stage make-up? ) and commented on my general bounciness. I suppose most of this blissing is from discovering the soul-flowers of the journey to Haiti. The tree has barely begun to bloom and yet the colors blaze. It's hard to describe. I think reading Zen upon returning was a good idea, I'm releasing a lot of energy from detatching various common and curious "obsessions" that were previously routine. One friend even asked me if I was in love, if I had a special "somethin' somethin'" in my life. I'm in love, yes Mary, with the Universe. We're getting hitched. But as far as hoochie-coo, no dice. Not Yet.

Then Mr. Short Dark and Handsome came along. I'd had a feeling about R for a while now; his energy, quirkiness and, "me no sé," his suavé, seemed to be a leading orientational indicator. Maybe the look in his deep conga-drum eyes. Well, I bumped, or salsa'd, into him and cha cha cha, we had a long conversation about film, art, and finally an exchange of quizzical questions and phone numbers. Not only is he deeply mired in creative virtues, he's a balloon artist. You might say that I'm excited, but I could be just high on helium.

Nothing in life is certain save the delight and adventure of uncertainty.