jaybird wrote this at 20.32 EST| entry link| your thoughts?|

"President Bush said if Iraq gets rid of Saddam, he'll help the Iraqi people with food, medicine, supplies, housing, education. Isn't that amazing? He finally comes up with a domestic agenda. And for Iraq! Maybe we could bring that here." ~Jay Leno ( ? ) via dangerous meta

Slate: The Poetry of Donald Rumsfeld - Recent works by the secretary of defense. Not bad for one of the world's top minions of evil.

jaybird wrote this at 19.21 EST| entry link| your thoughts?|

Arundhati Roy: Mesopotamia. Babylon. The Tigris and Euphrates. "'I wanna get in there and get my nose dirty," Private AJ said. "I wanna take revenge for 9/11.' To be fair to the correspondent, even though he was 'embedded' he did sort of weakly suggest that so far there was no real evidence that linked the Iraqi government to the September 11 attacks. Private AJ stuck his teenage tongue out all the way down to the end of his chin. 'Yeah, well that stuff's way over my head,' he said."

jaybird wrote this at 18.48 EST| entry link| your thoughts?|

What's the difference between American Fundamentalism and Islamic Fundamentalism? Merchandising! "Graced with the heartfelt prayer: "Lord, Bless This Defender of Freedom and Keep Him Safe In Your Hands." Authentically detailed with soldier's helmet, rifle, and desert fatigues.

Well, that's convenient! It's The Vortex Theory of Everything! "The five pieces of the universe: matter, space, time, energy, and the forces of nature are not constructed the way science presently believes. They are constructed in a way totally unlike anything anyone has ever imagined before. Their construction, creates a shocking vision of the universe unlike anything anyone has ever seen before. This revolutionary new vision of the universe is not only the Rosetta Stone of Science, it is the greatest scientific discovery ever made." via IncuBLOGula

≈
"Do nothing and there is nothing you cannot do."

As far as April Fool's goes, this was a quiet one. Oddly quiet. No clowns jumping out of lunchboxes, no mad fishmonger-esque rains of mackeral, no overt works of sorcery nor did misleading portents bop me in the face. If anything, the solitude and the tacit turning of time could be the biggest joke of all.

I don't know what to do, but that's alright. Soon enough my life will be a whirlwind of nonstop stimuli and strange, new and wonderful adventures in a land far away. Watching the cats chase eachother around, listening to the birds sing down the sun, stretching my legs under the desk and eating yogurt while reading up on various blogospheric memes is just fine for me right now. There's all kinds of things in my Coulda/Shoulda folder, in fact it's bulging with unvisited possibilities, but I feel perfectly justified with taking the peaceful, easy feeling that I'm being handed. It's a luxury that seldom is on sale in my store of days.

As the Zen Koan goes, "Do nothing and there is nothing you cannot do."

So from this point, from this lull, things will intensify, and that's just peachy, sans pits. I sometimes wish these ubiquitous things would just do themselves (especially dishes), but without a foundation in telekinesis I'm left to the old fashioned method of actually accomplishing tasks via effort and action, which is fair trade for existing in the first place.

At times like this, when the stars are slow to rise and the clock is caught snoozing, it's best to remember that procrastination isn't the enemy of progress, but rather it's lusty mistress that like things slow in coming.

jaybird wrote this at 20.40 EST| entry link| your thoughts?|

MetaFilter has done it again.

jaybird wrote this at 18.05 EST| entry link| your thoughts?|

I love Google News mostly for it's randomness, and I just happened upon this gem of a tagline:

jaybird wrote this at 17.57 EST| entry link| your thoughts?|

It's finally here, my favorite day of the year! You may call me a fool and I'll not find it cruel, for the first of April brings me such good cheer. It has a long history, full of pranks and mystery, and if you stick around you'll likely be bound to encourter some mischeivous trickstery.

jaybird wrote this at 17.14 EST| entry link| your thoughts?|

U.S. Forces Kill Seven Iraqi Women, Kids. Which makes you wonder... there won't be anyone left to 'liberate' if we keep killing civilians.

jaybird wrote this at 18.02 EST| entry link| your thoughts?|

AlterNet: Jay Garner, The Man Who Would Be King of Iraq. "A unilateralist hawk, the retired general is an ideological soulmate of Dick Cheney, Donald Rumsfeld, and Paul Wolfowitz, his main collaborators in developing the "axis of evil" approach to U.S. foreign policy. But when it comes to the Middle East, his track record is even more alarming."

jaybird wrote this at 15.26 EST| entry link| your thoughts?|

Nasiriya Firefight a Civilian Tragedy: "It's just a bunch of Hajis," said one gunner from his turret, using their nickname for Arabs. "Friggin' women and children, that's all." "...the bitter satisfaction of some of his
fellow marines as they surveyed the scene. 'The Iraqis are sick people and
we are the chemotherapy,' said Corporal Ryan Dupre. 'I am starting to hate
this country. Wait till I get hold of a friggin' Iraqi. No, I won't get
hold of one. I'll just kill him.' via MeFi

jaybird wrote this at 07.37 EST| entry link| your thoughts?|

Fisk:In Baghdad, blood and bandages for the innocent
"...the missile [that hit the marketplace in Shu'ale] was guided by computers and that vital shard of fuselage was computer-coded. It can be easily verified and checked by the Americans – if they choose to do so."

jaybird wrote this at 00.10 EST| entry link| your thoughts?|

jaybird wrote this at 11.47 EST| entry link| your thoughts?|

jaybird wrote this at 10.44 EST| entry link| your thoughts?| 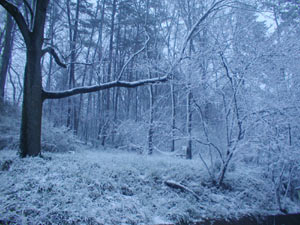 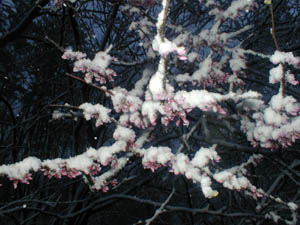 Well, having been blissing over the blossoms of early spring, I awoke to a cosmic WTF? Snow pouring out of the sky like New Year's confetti, a sudden rewind to those cold, dark, huddling against the elements kind of days a few months past. It's a heavy snow, too, and the pine tree outside my window looks like she's about to give up and snap. Once the crocuses start to show their stuff, I automatically stop thinking about ice crystals and switch modes to sweet spring rains and jasmine breath while Seals and Crofts sing about summer breezes for the one hundred millionth time. It's all too cliche to say so I may as well say it, "expect the unexpected!" If there's anything close to a universal truth, that may very well be it.

Maybe this is a warm up for April Fool's. Could be in for a humdinger this year.

jaybird wrote this at 07.09 EST| entry link| your thoughts?|